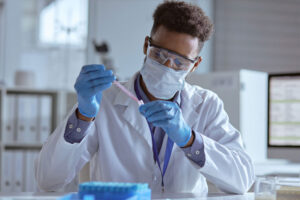 Forensic scientists shed light on the evidence that’s used to solve crimes and identify the guilty. Looking closely at all the grizzly details that most people would hope to never see, and even past what’s visible to the eye to examine microscopic and DNA evidence, forensic lab technicians and other members of forensics teams are a critical part of the investigative process.

With a unique skillset that blends expertise in the natural and physical sciences along with knowledge of investigative protocols and how it all fits into the criminal justice process, forensics professionals uncover answers and develop objective findings that are ultimately used to solve crimes.

It’s both a highly technical and highly specialized profession which, for the most qualified, means plenty of challenges, lots of professional opportunities, and some pretty impressive salaries.

With the right education and an intuitive knack for applying the scientific method to forensic investigations, you can play a part in cracking cases and establish yourself as a key player in one of the dozens of agency-specific and regional crime labs around the country that support the efforts of law enforcement. 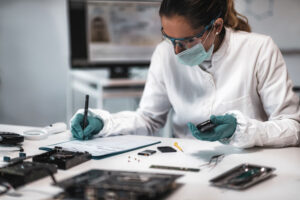 As of May 2020, the Bureau of Labor Statistics (BLS) reported that forensic laboratory scientists (categorized as forensic science technicians) earned an average salary of $64,890. Those fairly new to the profession can expect to earn about $46,460 (25th percentile), while those with significant experience and, often, graduate-level education and specialized knowledge in a particular area, earn about $100,910 at the top ten percent.

While education and experience play a part in the earning potential of forensic scientists, the industry in which you work is the largest determiner of what you can expect to earn in this profession. By and large, forensic scientists work for local, state, and federal agencies, with state agencies comprising the largest percentage— 60% — of the nation’s 16,640 forensic laboratory scientist jobs, followed by local agencies, which account for about 28% of the total jobs.

However, according to the BLS, the biggest salaries are to be found in the federal government, where forensic science technicians earn an average salary of $120,790 as of May 2020.

Both state and local government salaries can’t begin to compete, with the BLS reporting average salaries of $64,770 and $65,840, respectively, for forensic scientists in these sectors during this time.

While most forensic scientists work for governmental agencies, a select few also work for private hospitals and labs. According to the BLS, forensics professionals in the private sector earn an average salary of $75,720. 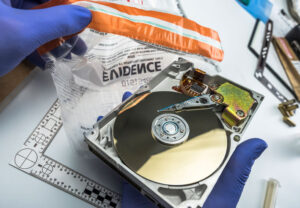 The National Institute of Justice Office of Investigative and Forensic Services and the FBI are two of the biggest federal employers of forensic  scientists.

The NIJ is where cutting-edge forensic science research and development take place. Forensic scientists here focus on both basic and applied scientific research to advance the field of forensics. Forensic examiners with the FBI evaluate biological evidence to aid in law enforcement investigations, criminal and civilian court cases, and other regulatory proceedings. Other specialized roles in the FBI’s forensic laboratories include:

These professionals are paid using the general schedule (GS) which, as of 2021, included the following starting salaries:

As expected, salaries for forensic laboratory scientists tend to vary based on location, with cost of living playing a big part in what they’re earning. In May 2020, the BLS showed top-paying states for forensic professionals by average salary to be:

The BLS also highlighted the top-paying metro areas for forensic scientists, according to average salary:

While California metro regions remain among the top paying areas for forensic laboratory scientists, on the other side of the country, Washington D.C. also came out of top as the main location for all those high-paying jobs in federal agencies.

The following BLS table provides a closer look at what forensic laboratory scientists are earning according to state and career level (25th percentile = early career professionals; 90th percentile = seasoned professionals with a graduate-level education and specialized knowledge in one or more areas):

As of 2019, there were about 17,200 forensic laboratory scientist jobs in the U.S. By 2029, this number is projected to grow to 19,600 workers – an increase of 14%, which is more than three times the projected national growth rate for all professions during this ten-year period.

During this period ending in 2029, the profession expects to see about 2,300 annual job openings due to a combination of new job growth, retirements, and natural job turnover.

A bachelor’s degree remains the minimum educational requirement to become a forensic laboratory scientist, although a graduate degree is valued in the profession and can lead to higher salaries and top-level laboratory positions. An undergraduate degree in an area like biology, chemistry, or forensic science, followed by a master’s degree that focuses on a specialized area like toxicology, physical evidence, DNA, trace evidence, or latent prints remain a common educational path for forensic scientists.